Welcome back to Release Week!  Our next image is a playful one named Yoshi.  Yoshi is my cousin's name and is short for Yoshio.  If you remember Yoshimi, he's her brother.  Funny yah?  Yoshio and Yoshimi? When I asked my Aunty why she named them so similar names, she said my grandmother named both of them.  My cousin is actually named after his father (his first name), but we all called him Yoshi instead of his given name.  I guess so as not to confuse him with his dad.

This image is so playful, which is why I picked it to name after my cousin.  When we were young, my two cousins, Yoshi and Yoshimi used to come over early Saturday mornings- and I mean early!  Like before the sun came up.  Their mom used to work with my mom at a coffee shop, so they were dropped off for my sister to watch all of us.  I remember Yoshi used to watch cartoons as soon as they were on. I also remember him staring at my sister until she woke up on Saturdays!

Yoshi was always a bit mischevious, so I think that's why this image just screamed his name to me.  He used to irritate his little sister (like most older brothers do) and seemed to get away with more than me and Yoshimi did.  We used to have to clean the bathroom, while Yoshi used to watch TV.  Not fair I tell you!  But that's in the past and now Yoshi is not as waru bozu as he used to be.  Still I have fond memories about those Saturday mornings.  Seems like it was just a few years ago and now we are the adults!

So when my sis emailed this image to me, I had just one thought... spinner card, don't 'cha think?  She said she actually had that in mind when she drew him.  I love his pose- makes it great for interactive cards... and if you know me, I LOVE interactive cards!  So I dusted off my word window punch by SU and found a few pennies to make this spinner.  I had fun making it since it's been awhile since I've made one. 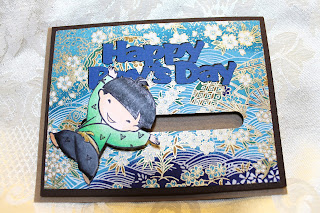 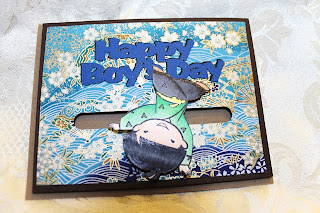 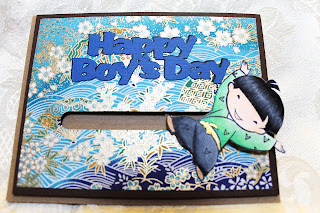 Well, it's not a video but you get the jist right?  Oh yes, must not forget about the washi paper.  While at CHA this year, I found a washi paper company that had some great designs.  I was happy to get my hands on them recently- perfect color too for my boys!

So here's your chance to win Yoshi... Check out the introductory post for Katsura (posted yesterday), and in addition to being a follower and leaving a comment, tell me if you had an older brother or cousin, or other family member that was mischevious too!  I have another story to tell you about Yoshi, but I'll save it for a future post! :)

Email ThisBlogThis!Share to TwitterShare to FacebookShare to Pinterest
Labels: Yoshi