Welcome to the week long festivities for our Release #11 images!  We have more images than normal, in most part because we are releasing 3 new images along with two additional Chinese Zodiac characters.  There's a lot to cover this week, so we need to get an early start in order to get everything covered!

Let me just give you some background to how these images came to be part of the Sister Stamps family... While brainstorming with my sis, we tried to think of "Japanese-y" characters and/or symbols that were identified as being Japanese.  They were initially supposed to be companions or props to the images we've already released.  But we thought they were so darn cute, we decided to release them on their own which would allow you to use them how you wanted.

The first of our lucky charms collection is the Daruma.  It's funny because whenever I hear that name, I always think of my high school friend's dog.  Her name was Daruma too, but they called her Dar.  I guess Daruma was too long to say?  Anyway, I always feel like I should call the Daruma character "Dar" too.  hee hee.

So in case you didn't know much about the Daruma or "Dar" as I'll be referring to him in this post (hee hee), you can read the back story here...  Dar is more commonly known as a gift of encouragement because he's commonly used in setting goals.  When you purchase a Dar from the store, he normally has two "blank" eyes.  When the recipient sets a goal, they fill in one eyeball.  Once the goal is accomplished, they fill in the other eyeball.  Neat yah?  Just thought I'd share that with you.

So on to my project... I recently took a class up in Volcano with a couple of friends.  We had a blast making several different types of boxes that can be used for gifts or favors.  I thought this one was nice, especially when used with this japanese printed wrapping paper.  When I came home from the class, I thought it would look cute with my friend Dar on it.  So I added him onto a black circle and then adhered him to the middle of the box. 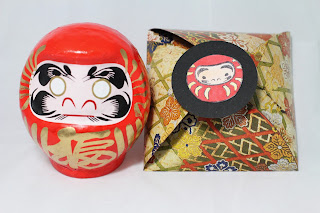 Here's the side view. 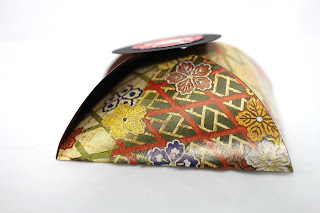 So now that you have met my new friend Dar and know why he's so popular in Japan, here's your chance to win one of your very own.  All you have to do is:

I will pick one random winner to win Dar.  The deadline is earlier this time since I'm off to Japan soon, so I wanted to mail them out before I leave.  Good Luck!
Posted by Jenny at 12:00 AM

Email ThisBlogThis!Share to TwitterShare to FacebookShare to Pinterest
Labels: Daruma