Ok, enough dogs right?  Where's something for the cat people out there?  Well, we have something for you guys as well...  Meet Otsu!  Otsu was my mother-in-law's kitty when I first moved to the Big Island.  She actually had three cats at the time, but Otsu was the mellow-ist of them all.  Even though she was mellow, she was still the boss.  When Paul's cat Ranma moved in, their other cat Spuds went into hiding while Otsu stood her ground and didn't let Ranma take over the house. 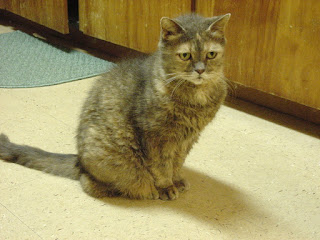 Otsu had the sweetest meow ever!  It was really high pitched and sounded more like "Aaaaaak".  I always wondered why in the Bloom County cartoons Bill the Cat said "Aaack" instead of "meow", but after meeting Otsu, I found out cats really do make that noise too! 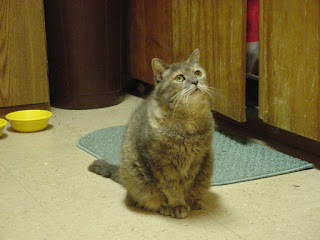 And here she is taking a catnap on the couch.... 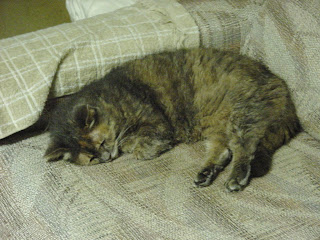 Now, I was never a cat person.  I think it's mostly because I'm allergic to them (big time), so I try to keep my distance.  But being exposed to these cats has been very educational.  They are very affectionate- almost as much as dogs, don't make much noise, and are easier to clean up after than dogs.  My daughter really wants a cat, but unfortunately I can't have any.  I'm sure she'll get one once she moves out of the house.  For now, whenever she needs a cat-fix she goes Grandma's and visits Plumpy.

Ok on to the image... I am on a washi tape roll (get it?)  I love how if make a mistake, you can easily lift up the washi tape and re-position it without ruining your project!  I'm still learning how to use it in projects, but I'm slowly getting it. 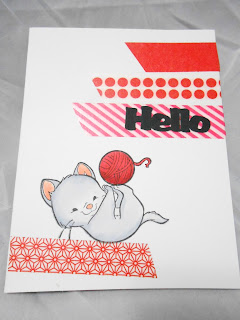 So just to let you know cause you can't really tell by this card, when you purchase (or perhaps win) Otsu, you will also be getting the yarn ball and a present image along with Otsu.  My sister and I talked about having some flexibility with this image and allowing the stamper (you) to change out what Otsu is playing with.  In this card, I made her playing with a ball of yarn, but if you wanted to change it to a birthday card, you could stamp the present instead of the yarn.  So you actually will be getting 3 images instead of just one.  And because the images are not attached to the cat, you can also use whatever you already have.  I've used hearts, cupcakes, etc. in place of the yarn or present in the past and they all seem to work out purrfectly! 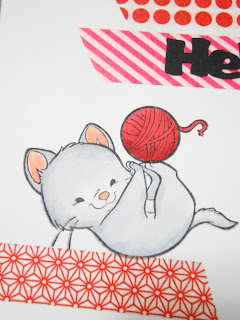 Oh.. and decided to use an Island Scrapbooking custom laser cut "Hello" sentiment.  It's so easy to adhere them over the washi tape! 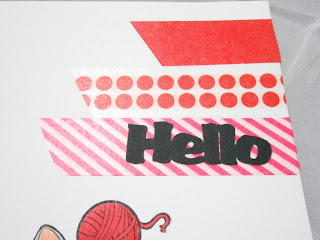 Please join us tomorrow to find out who our guest designer is and some other special surprises!
Posted by Jenny at 12:00 AM

Email ThisBlogThis!Share to TwitterShare to FacebookShare to Pinterest
Labels: Otsu