Yay!  It's release day!  Can you believe we made it through all 12 images?!

For my last project, I got a little playful.  I guess I was in a rascally mood.  The Rabbit image's expression is to straight and stoic and Daba is so silly and playful, I just had to combine the two together.  While brainstorming ideas on projects, I started laughing out loud when I thought of this... 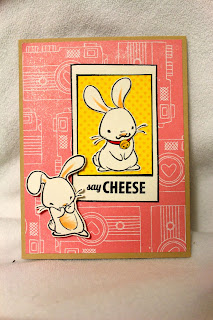 So I started off by stamping the polaroid from the We Click set by Mama Elephant.  Before I say more, I just have to know if you guys have ever used a polaroid camera before? Me and my co-worker were talking about polariod cameras one day and she told me she's never seen or used one before.  Wa-wa-what???!!  How is that possible?  Then I realized just how young she is, or maybe just how old I am.  Sigh....

The We Click set also comes with a few sentiments that fit perfectly on the polariod. I chose the Say Cheese sentiment because I thought it was funny that the Rabbit wasn't smiling.  I'm sure you know people who do that right?  You say- Say Cheese! and no reaction.  Maybe they are thinking they are smiling in their mind?

Got side tracked again.... So then I stamped and cut out Daba.  I think Daba is a real joker and gets a kick out of his own pranks.  He drew a moustache on the Rabbit!  Bwahahahahaha!

The background paper used was one of my favorites by Amy Tangerine.  I love the camera pattern- especially because it has hearts in the lens!

Forgot to take a photo of the inside, but I used the other sentiment from the We Click set that says "Life is like a camera, face it with a smile".  I'm going to try to think of this statement when I'm having a crappy day.

Thank you for joining us for this release!  We have one more release for 2013 that is coming up next month.  Can't wait to share that one with you!
Posted by Jenny at 12:00 AM