And now it's time for our next Chinese Zodiac releases!  As you know, we are releasing all of the Chinese Zodiac characters this year.  By the end of 2013, we will have the complete set available.  Animals colored in are available now. 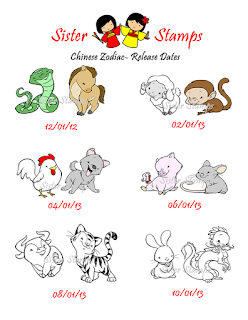 I recently discovered that within our family, we have someone in almost every sign of the Chinese Zodiac!  Since I had previously made a mini scrapbook page found here... I thought I could make a scrapbook using all of the images!

The next in our series is the Pig/Boar... The last time it was the year of the boar, my nephew was born. He lucked out and came in at the tail end of the lunar year and made it in as a GOLDEN pig.  Apparently this lucky year only comes around every 600 years?  Check out this article...

My nephew was recently crowned May Day King at his pre-school's May Day program.  How does one get to be May Day King at pre-school?  We found out it was because he has been at that pre-school the longest.  Guess he is lucky and GOLDEN!  So I named this layout... "Golden Boy". I have a feeling this boy will be one lucky pig. 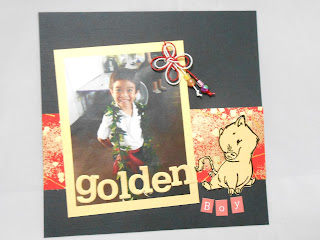 I didn't think I could color up the pig with gold markers, so I decided to heat emboss it onto gold cardstock. 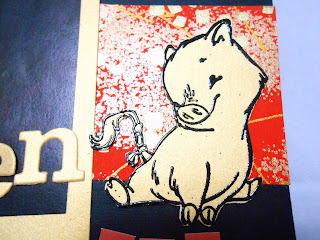 Kept the layout simple using just a strip of washi and added the word golden in the same gold cardstock.  It was cut using a PTI alphabet die set.  The "boy" was done using Simple Stories alphabet stickers.  And that little mizuhiki was purchased in Japan from my last trip.

That's all for now... stop by tomorrow for more Zodiac fun!