How cool were those DT projects?  Can't wait to see more of them today!  Seriously.. I don't ask to see projects before they are posted, so when I wake up in the morning of group post days I get a little giddy!

Don't forget to check them out again today to see what other creativity has been unleashed:
Debi
Eva
Linda
Linda's You Tube channel

On to my project... Have you ever seen a project that you just can't stop thinking about?  Well, if you've ever watched Bona's channel Live, Love, Scrap on You Tube, you'll understand what I'm talking about.  Her creative mind is on another level that I can't even comprehend!  I love all of her projects and her style is so pretty.  Don't know how she does it!    One of the projects that I've been drooling over is her stacked teacups.  I even bought the Sizzix die because of it!  Here's what I came up with... 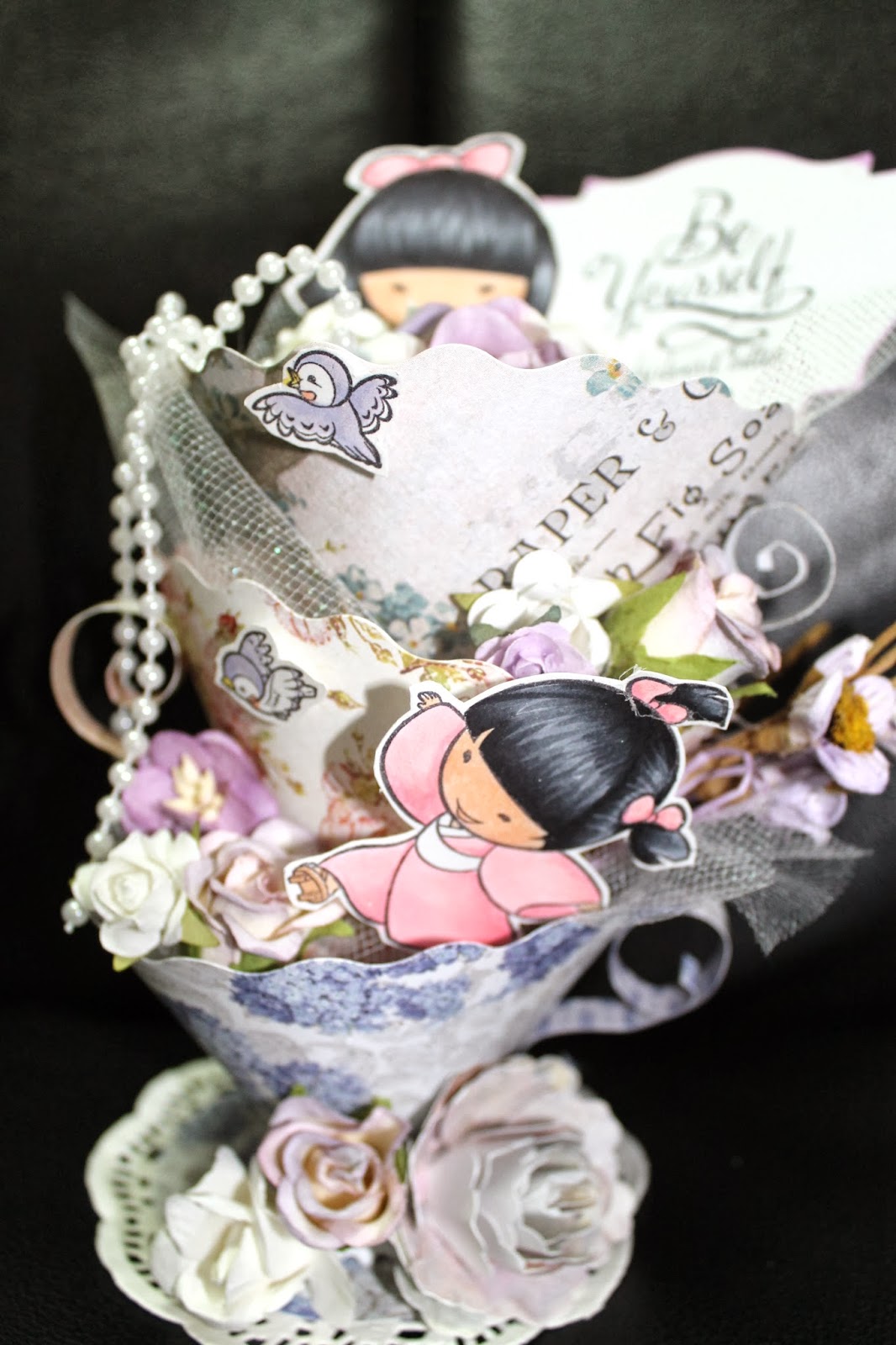 So if you know me, you'll know I'm a pastel girl.  Most likely I'll choose pink over other pastels.  My friend Linda on the other hand is a purple girl.  So I was a bit surprised on our trip when she started choosing pinks instead of purples.  And even more surprised now that I'm choosing lavenders over pinks!  I know pink will always be a favorite of mine, but if you know me, sometimes I get bored and need to try new things.. including color.

In the top teacup, I filled it with a large lavender rose that I picked up in Downtown LA.  OMG, we had so much fun getting lost and finding awesome deals in Downtown LA.  It was a bit scary though, so as Creative Young Mama says... hope you are wearing covered shoes so you don't get pee'd on!  She cracks me up.  It wasn't quite that bad, but you know what?  I was soooooooo worth it. Go check out my blog posts and Linda's YT haul's to see what I'm talking about.

I also cut out a label from my Spellbinder's dies (see I'm even using some of my old stuff!) and stamped the "Be Yourself, Nobody does it better" stamp I just got from Michaels on my trip.  Love, love, love this sentiment! And can't forget Ha-chan!  Love how she is peeking out from behind the rose!  See... very versatile! 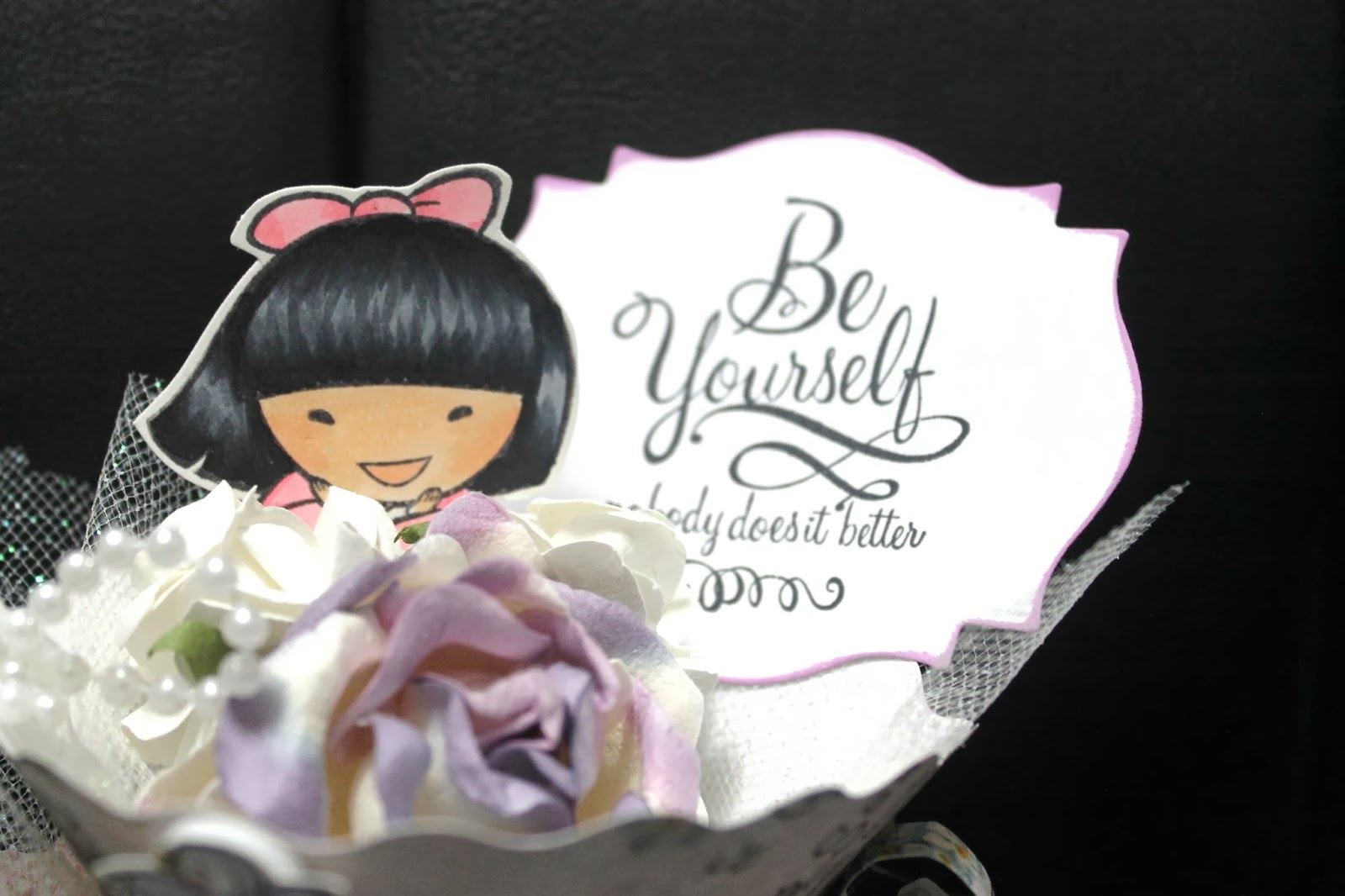 And decided I wanted something to dangle from the side of the teacup.  I'm a sucker for dangling stuff.  So I ended up tying a bow out of my pearl trim and glued it to the side. 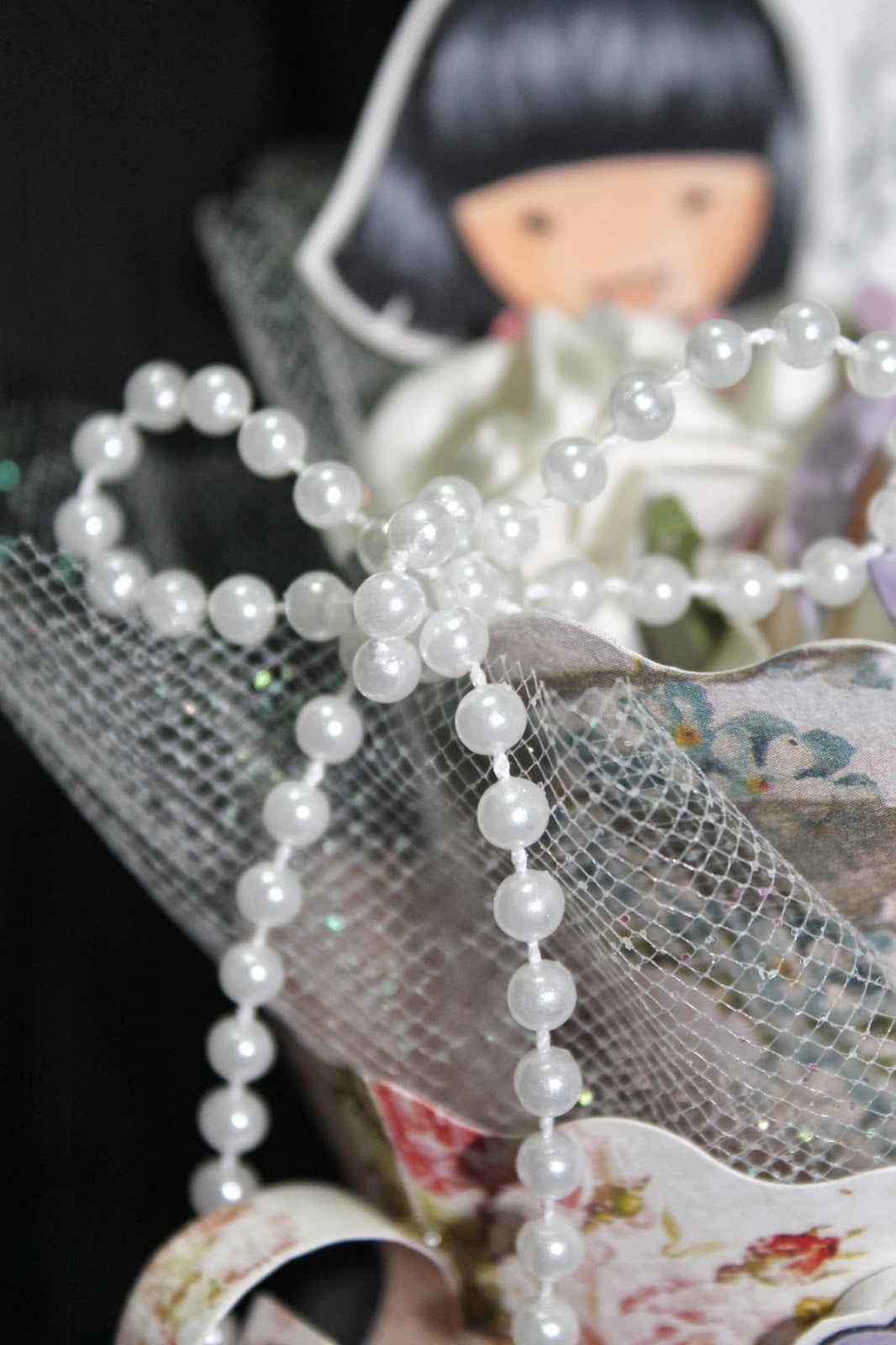 On the middle cup, I added Misaki and her birdy friends! 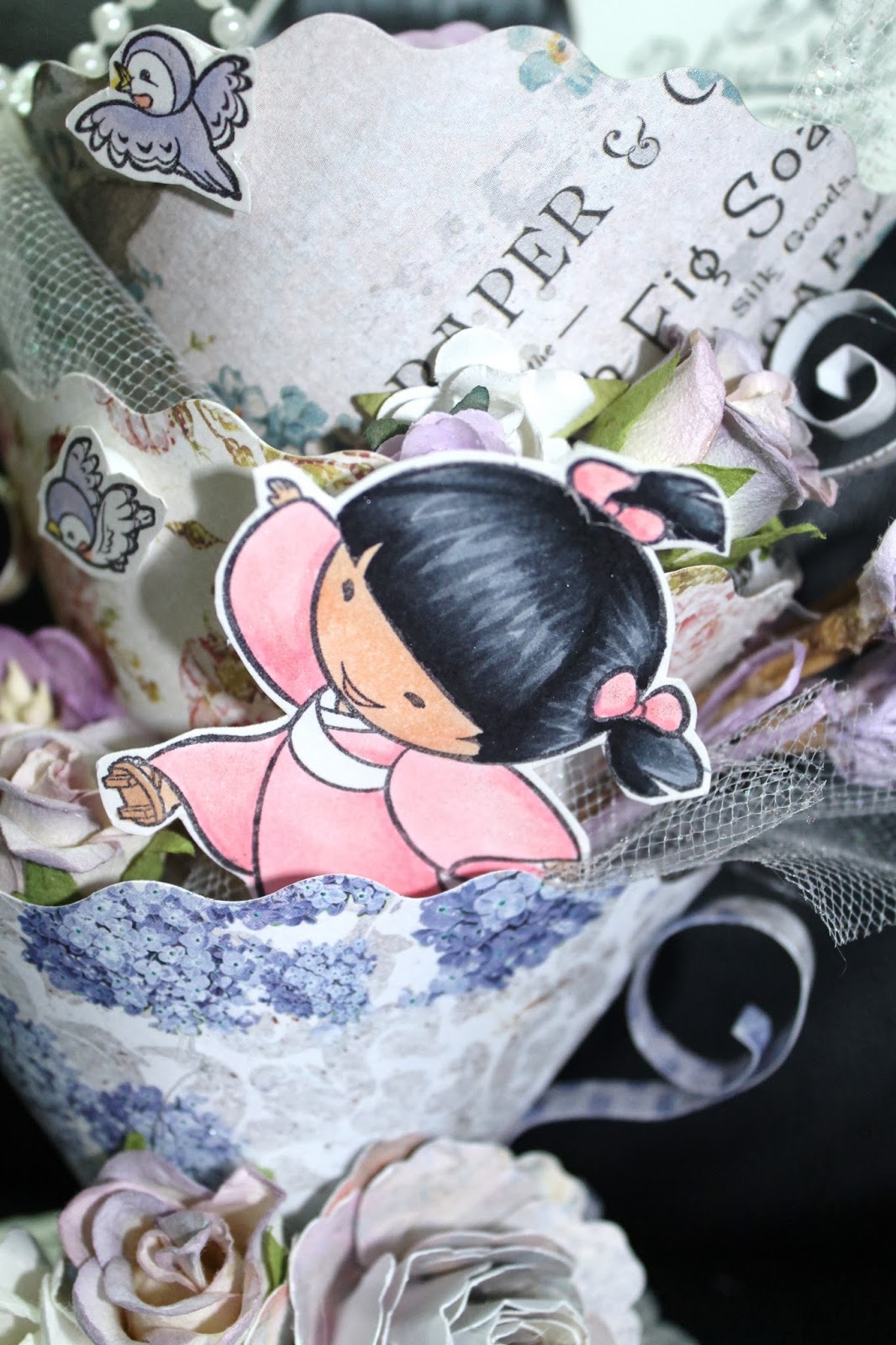 And because the teacups were made out of lightweight paper, they kept falling over with all the added embellishments.  To stabilize it, I glued the bottom of the cup to a circle, then glued the circle to a doily, then glued another circle to the bottom of the doily.  Seemed to help stabilize it better so it won't fall down as much.  Then I glued more purple flowers to the base of the cup. 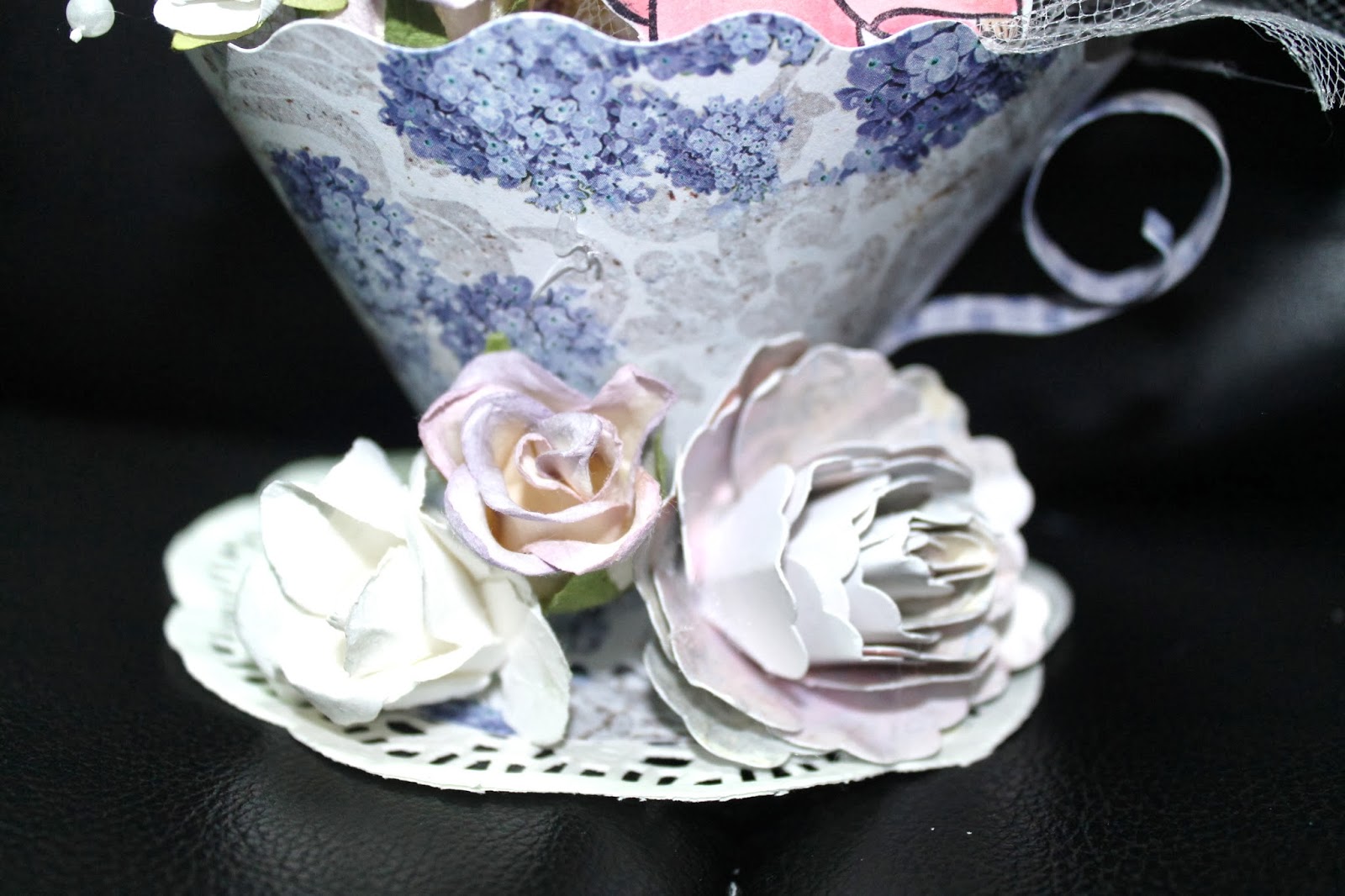 It's no where near as nice as Bona's project, but I had fun making it!  At least I got to use my teacup die!  Check back tomorrow for my last project!
Posted by Jenny at 12:00 AM