Received a whole bunch of samples in the mail today from Aunty. I just love getting fun mail! Here's one of the cards she sent... Its Miyono-chan dancing in the middle of a Spellbinder frame. I love how she used the negative image to frame Miyono. I never remember to do that and always end up just mounting my image directly onto the die cut. I'll have to remember to use that technique in the future. 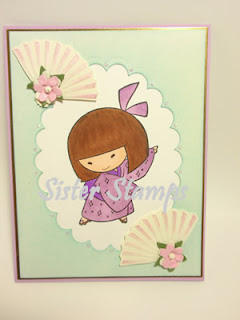 I think its really cool that she included fans in this card. I've received comments on Miyono that she looks like she should be holding a fan. I guess Aunty felt the same way and added in some small fan accents. I love her attention to details as I would probably not remember to decorate the fan itself. I think she even inked up the fan to give it some depth and dimension. You can't really tell from this photo, but the fans are embossed (Dreamweaver stencil). 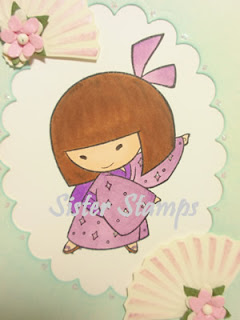 Check back tomorrow for another creation by Aunty. Don't forget to enter into our blog candy(s) on each introduction post! There's still time to enter before the deadline!

Email ThisBlogThis!Share to TwitterShare to FacebookShare to Pinterest
Labels: Miyono