Hooray! Our first boy image is finally here! Yes, we have our first boy all because of you! On one of our first posts, we asked you what you wanted to see from us and the response was overwhelming! So my sister got to work and produced more y chromosomes just for you. Nobu is the first of our boys and was not originally planned for our 2nd release, but we couldn't wait to introduce him to you, so I slipped him in.

Nobu is named after my only nephew- or "Baby Z" as his Mommy calls him. Its funny, cause whenever I picture someone named Nobu, I picture an old Japanese man, not a toddler. Baby Z was actually named after Grandpa K., so I guess it is a name from an older generation. This image is so fun and carefree, kinda like Baby Z. I like how my sister put that toy in his hand. Did you ever have that drum toy? It looks like the one from Karate Kid 2 (ok if you don't know what I'm referring to, please go netflix that movie and then come back and finish reading this post). 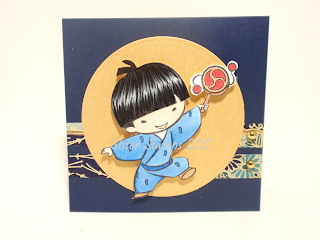 Here's a close up of Nobu. I've been studying the hair on Mei Lin from the card that Mama gave to me. I'm slowly figuring it out, but not quite there yet. This is the first time I'm coloring up Nobu and it was so much fun! Its nice that his hair is short and not so time consuming as some long hair can be. He is making me hungry for some Tomoe Ame candy or Tomoe Arare! 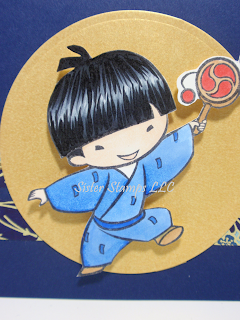 Don't forget to leave a comment on THIS POST for a chance to win Nobu. In addition to the regular rules listed on the Ayako post, tell us what other types of boy images you would want to see.

Email ThisBlogThis!Share to TwitterShare to FacebookShare to Pinterest
Labels: Nobu